With advances in computers and digital signal processing, more and more music is being made within a computer, essentially within a virtual reality. There are even entire albums of synthesiser music where no real air molecules were vibrated at any point right up to the speakers the final listener is listening with.

Even more extreme - in many cases not only have no air molecules been vibrated, but no real electrons have flowed through an analogue circuit - it has all been simulated digitally!

I am am not at all opposed to these tools. I use them myself. They are very powerful and can give great results. But if we never engage with the physical world at all I think we lose something. We lose an appreciation for physicality - but also we lose the rich palette of sounds that can be created by moving electrons, and moving air molecules about in physical reality.

More importantly, using physical tools allows us to engage with sounds that are not understood well enough by a DSP programmer for them to create them in software. It also allows us to use a wide range of traditional recording skills and apply them to any recording, including those made without a physical sound source. 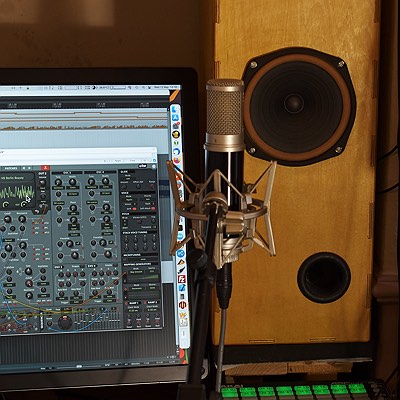 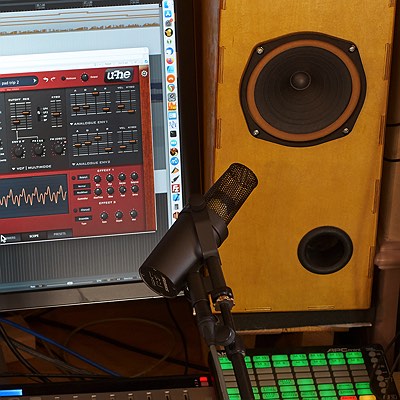 It would take many photos to show all the possible combinations of speaker, mic, and mic preamp that I might use for this process. Not to mention different mic placements and different synth plugins.

These photos show one of my favourite speakers for playing synths and electric pianos through - it is a 6.5" fullrange speaker, an asian-made clone of the legendary Diatone P610. I find that single drivers give better results than two or 3 way systems with a crossover. I have quite a collection of single drivers, full range and otherwise, which can each impart their own flavour to a track.

The mics are one of my own condenser mics with a slightly C12ish flavour, and a Shure SM7. Synth plugins pictured are U-he Bazille, and U-he Diva, though usually I would make a stem track of the synth part rather than working direct from the plugin.

The mic preamps are not pictured, but I have a range, from super clean based on THAT chips, through to fet and opamp based preamps through to valve and transformer preamps, each with their own tonal influence.

Over the last 20+ years of building audio equipment for my own use, and collecting recording gear I find useful, I have built up a large collection of mics, mic preamps, amplifiers of various sorts, and speakers. I've built quite a bit of valve equipment, mostly guitar amps and mic preamps.

I discovered a couple of years ago when producing an album that had a mixture of synthesisers and real instruments that the synths could be made to sit better in a mix with the real instruments if each track was played through an appropriate speaker and recorded with a mic and preamp chosen to suit the sound, just like you would for a recording of a physical instrument.

For music made entirely in-the-box there is less urgent need for this process, since there isn't the obvious disconnect between the real and virtual instruments - nevertheless the process of re-recording the synth tracks through the air and a speaker and mic chosen to enhance their sound can give a production a whole new angle. It becomes an extra layer to the sound design process that allows entirely different sorts of creative changes.

However, most musicians do not have a large collection of amps, speakers, mics, and preamps to do this with. This is especially true of musicians making in-the-box synth music. So I am offering to do the re-recording process for you.

This would be in the nature of a collaboration on production in that I would be making some musical/production decisions about which equipment would best enhance a particular track - I would expect to discuss with the composer/producer what the tonal goals for each track were and likely provide alternative takes with different setups for each track.

I have not decided on what the fee for this should be, but the first few customers will get a great deal as I try out the process of doing this for someone else!

If you are interested please email me (at parenthetical at this domain) to discuss it.